The Rugby League World Cup trophies were on display in St Helens last week as excitement builds ahead of the borough's involvement in the tournament later this year, tipped to be the biggest and best one yet. 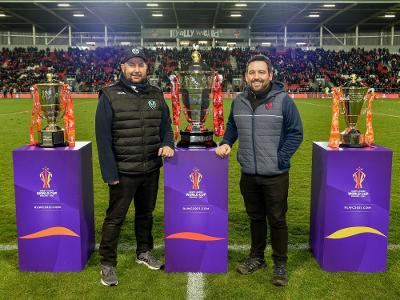 To be held in England between 15 October to 19 November, organisers are aiming to draw in record crowds, with the men's, women's and wheelchair competitions staged in a single, celebratory event.

As part of a promotion tour, all three trophies were down at Sutton Leisure Centre on Friday for an inter-schools games event - organised by St Helens Borough Council's Sports Development - before heading over to the Totally Wicked Stadium in the evening for Saints vs Warrington Wolves, the same fixture the council and Saints submitted a joint host venue bid to the Rugby League World Cup back in July 2018.

Despite being more than 10,000 miles apart, the bond between St Helens and Tonga has never closer, with Saints head coach Kristian Woolf as well as players Agnatius Paasi and Kondad Hurrell involved in the international team.

In light of a devastating tsunami which hit the island earlier this year, Saints recently launched a Tongan Appeal - highlighted at Friday's match - which has led to an overwhelming response, with rugby league supporters and community clubs making generous donations to the cause.

St Helens Borough Council Leader, Councillor David Baines, said: "To have the Rugby League World Cup taking place here in St Helens is huge for the borough. Rugby league is in our blood here - we're home to the mighty Saints, who currently hold an incredible five trophies after history-making seasons for both the men and women last season - and for the club, all the supporters, our outstanding community clubs and the community as a whole, the World Cup will be something special.

"To see the trophies up close in front of such a large crowd at Saints vs Warrington, one of the biggest fixtures in Super League, was spine-tingling stuff and a sign of exciting things to come.

"It was a great shame that the tournament had to be postponed because of covid last year, but we'll be more than ready for it this time round and the boost it will bring our borough, given the past two-years we've all faced, I'm sure it will be spoken about for years to come."

Councillor Anthony Burns, Cabinet Member for Wellbeing, Culture and Heritage, added: "Rugby league runs deep in our communities and with our proud history and success in the sport thanks to the mighty Saints, it would be hard to imagine a World Cup going ahead in this country that didn't involve St Helens.

"The great thing is, the tournament isn't even underway yet, but local amateur clubs are already benefiting from the tournament through its legacy fund which the council has match funded through a £500,000 pot to allow clubs to grow, with improved playing facilities and club houses among some of the projects being delivered.

"To have some of the biggest stars in rugby league here will be influential in inspiring the next generation of talent with dreams of their own of playing at the highest level which we as a council fully support, which is why we have invested in grassroots here in our borough where rugby league is more than just a game - it's a family. A sentiment that has certainly shone through during the pandemic and in response to recent events in Tonga, with teams going above and beyond to help those in need."

St Helens R.F.C. Chief Executive, Mike Rush said: "We are all really excited to host our Tongan friends here in St Helens ahead of the RLWC taking place later this year.

"We have had a hugely successful few years as a Club and we will play our part in ensuring this World Cup is equally as successful and the best ever.

"We had the RLWC trophies at the Totally Wicked Stadium on Friday at our game against Warrington and as expected they went down a treat with our fans and I am sure excitement will continue to build as we edge closer to the tournament."

Jon Dutton, CEO for RLWC2021, said: "It was brilliant to see St Helens once again show its support for the Tongan humanitarian appeal on Friday night.

"Having benefitted from the tournament's trailblazing social impact programme, it's fitting that the St Helens community is doing so much to provide relief to people thousands of miles away in Tonga. Our three trophies which were on display on Friday night are symbolic of the rugby community coming together to help those in need.

"There is a real sense of anticipation from fans across St Helens as we count down the days to the RLWC2021, which starts on October 15 this year and as a town synonymous with rugby league, I have no doubt the St Helens community will make world class hosts; helping us in our ambition to stage the biggest, best and most inclusive Rugby League World Cup in history."