Work is set to start on a new station booking office and decked car park at Lea Green Railway Station this April as part of the £15m St Helens Southern Gateway project to encourage use of public and active transport. 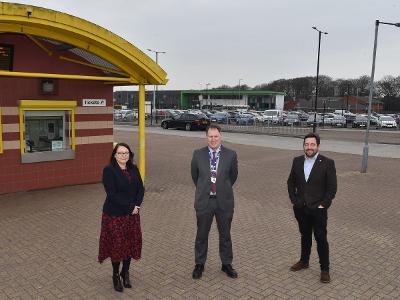 A partnership between St Helens Borough Council; Liverpool City Region Combined Authority; and Northern Rail - St Helens Southern Gateway focusses on making sustainable travel an easier choice for commuters by linking up Lea Green - which since 2018 has seen an increase in services stopping at the station - with safe, dedicated pedestrian and cycling routes, connecting nearby residential, leisure and employment areas.

The new car park will be built over two phases, with allocated expansion land to the west of the current car park developed into a surface level car park in phase one which will provide around 60 spaces for rail users.

Once complete the existing car park will be closed so that construction can begin on a decked car park which will increase park and ride capacity to around 450. This is expected to be completed by February 2023. Throughout the works limited car parking will be maintained on site for rail passengers. Passengers will also be able to access parking at St Helens Junction.

Other significant upgrades forming part of the project - funded by the Combined Authority's Transforming Cities Fund - include a new station building at Lea Green with waiting room, toilets and other customer facilities, along with a signalised junction, featuring specially-allocated lanes to protect cyclists from motor traffic, replacing the roundabout by the Bull and Dog pub next to the station. Both developments are expected to start in the summer.

In conjunction with this, work is ongoing to install a number of new walking and cycling routes, connecting Lea Green to nearby residential, leisure and employment areas.

Speaking at a recent site visit, St Helens Council Leader, David Baines, said: "With services calling at a number of key cities, Lea Green is without question one of St Helens' busiest and well-used railway stations, so it deserves first-class facilities to match.

"Through the St Helens Southern Gateway project, we're further enhancing the borough's emerging active travel network, making walking and cycling more accessible for shorter trips, and rail travel an easier option for longer commutes as we work to achieve our goals of reaching net zero by 2040 - while promoting good health and supporting a strong, diverse and well-connected local economy."

"The Liverpool City Region has big plans for public transport across Merseyside which St Helens will play a key part in - with this investment improving facilities in and around Lea Green for rail users, pedestrians and cyclists."

"Faced with a climate emergency Mayor Rotheram and the Combined Authority have set a target for the Liverpool City Region to become net zero by 2040. To make this ambitious goal a reality we need to build a genuinely attractive alternative to the car which is why the St Helens Gateway project is so important.

"Expanding car parking and improving walking and cycling connections for rail passengers at stations like Lea Green are part of our plan to deliver a London-style integrated transport network for the whole city region, where people can switch easily between different modes of travel and always be sure they're paying the lowest fare."

"We are working hard to make sure our stations are safe, accessible and welcoming places for customers and new and improved car park will make a big difference to our customers."

The whole scheme is expected to be completed by early summer 2023.