An innovative programme designed to support families in St Helens Borough affected by alcohol dependency has been recognised at a national celebration event highlighting best practice across the country. 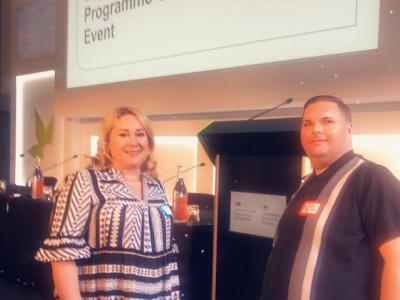 The St Helens Building Bridges programme was initially launched in 2018 to help provide better support for families and particularly children affected by parental drinking and conflict in the home.

Since then it has provided training for over 1230 professionals in the borough, including social workers, GPs, health visitors, student social workers, as well as schools and local colleges.

The initiative has also enabled the screening of over 2,000 referrals in the borough over alcohol dependency, resulting in direct support being provided to affected families locally. It has also led to a significant rise in the number of parents now successfully receiving treatment for their alcohol dependency.

As a result of its success in helping families tackle the impact of alcohol dependency, St Helens Borough Council's Public Health and Change Grow Live (CGL) team was invited to attend a national celebration event in London of the work done since the launch of the Building Bridges programme.

St Helens was initially one of nine areas across the country who were awarded national Innovation Funding from the Department of Health and Social Care (DHSC) and the Department of Work and Pensions (DWP) for the initiative to help provide better support for children whose parents are alcohol dependent.

St Helens Building Bridges initiative was evaluated locally by Liverpool John Moores University and Nationally by the Tavistock Institute. The service developed in St Helens and the other eight areas involved in the programme will now contribute to a new national cross government strategy to support other areas in developing similar support services.

Councillor Anthony Burns, St Helens Borough Council Cabinet Member for Wellbeing, Culture and Heritage, said: "The work of the team in St Helens to make this initiative work has been outstanding and has provided vital support to families and particularly children affected by alcohol dependency in the home.

"It has also provided excellent training to our GPs, student social workers, schools and colleges and hopefully it will deliver further benefits elsewhere in the country with the adoption of a similar approach in other areas."

Ruth du Plessis, Director of Public Health at St Helens Borough Council, said: "We are thrilled to have been part of this innovation programme to recognise and support whole families affected by alcohol dependency and we are proud to share our good practice in St Helens with other areas and the national policy makers so they can learn from our successes.

"The positive feedback from families, parents and children on how this programme has changed their lives has been overwhelming and we have made sure that this type of support will still be available for families in the longer term."

For more information on the St Helens Building Bridges programme, or if you are concerned about someone's drinking or drugs use contact Change Grow Live (CGL) via : Integrated Recovery Service - St Helens| Change Grow Live or contact 01744 410752.