The Chair of the Liverpool City Region Freeport has visited Parkside to see work under way to unlock the huge potential that Freeport status for the site will bring. 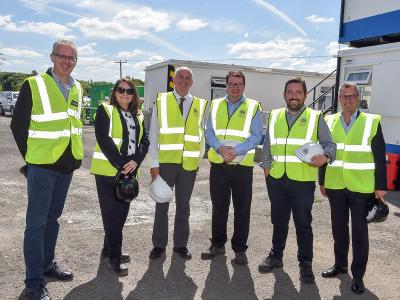 Thomas O'Brien was joined by the Leader of St Helens Borough Council, Councillor David Baines and and St Helens North MP Conor McGinn alongside others from the Council's Joint Venture Partnership with Langtree and key stakeholders to see works progressing on phase one of the site and the Parkside Link Road, which will open up further development opportunities on the Newton-le-Willows based site.

Parkside is seen as a key part of the Liverpool City Region's Freeport plan as the largest of three 'tax sites' in the region, this represents a major opportunity to attract a range of high value investment, support new skills and job creation at the site and provide local supply chain opportunities for existing businesses. It will strengthen the role that St Helens Borough plays in the region's position as an attractive location for global trade, inward investment and innovation.

The freeport status for Parkside also builds on the borough's advanced manufacturing capability, logistics and emerging location for research and innovation.

Councillor David Baines, Leader of St Helens Borough Council, said: "Parkside is one of the most significant opportunities for growth and investment in the whole north west, and arguably in the entire country. It is key to the Liverpool City Region Freeport and we are determined to make sure that our borough and wider region gain every possible benefit from its potential. It was great to have Tom come and join us at Parkside to see the progress we're making in turning a promising vision into a reality, with the help of our partners at Langtree and the Liverpool City Region Combined Authority and the support of Conor McGinn MP."

Commenting on Mr O'Brien's visit, Parkside Regeneration chairman John Downes said: "Growth at the Port of Liverpool has been on a long, steady upward curve for many years and Freeport designation will give it further momentum.  Parkside provides the room for port users to exploit the advantages of Freeport status whilst providing a major economic boost to St Helens and the wider city region. It was a pleasure to be able to show Tom O'Brien just how big a role we can play."

Thomas O'Brien, Chair, Liverpool City Region Freeport, said: "The Liverpool City Region Freeport is a key part of the national program to improve the UK's competitiveness. Our Freeport has truly global ambitions, and Parkside at St Helens is a world-class asset to attract growing firms from far and wide. It's exciting to see first-hand that work is already underway. St Helens Borough Council and Langtree can count on the support of the Freeport team to ensure that Parkside, as part of the Freeport, plays a major role in creating good jobs for local people and families across the metropolitan area."

Conor McGinn, St Helens North MP, added: "A fully regenerated, dynamic Parkside has massive potential to drive inward investment, good jobs, skills and economic growth across St Helens Borough and the wider region. Being at the beating heart of the Liverpool City Region Freeport is absolutely integral to that.

"It was fantastic to have Tom O'Brien visit Parkside, to see our progress and the hard work we're doing to get the site firing on all cylinders once again, and unlocking those opportunities for our people."