Pupils at Holy Cross Primary School in St Helens enjoyed a PE lesson with a difference - a coaching session with Saints stars to mark 200 days to go until the Rugby League World Cup 2021. 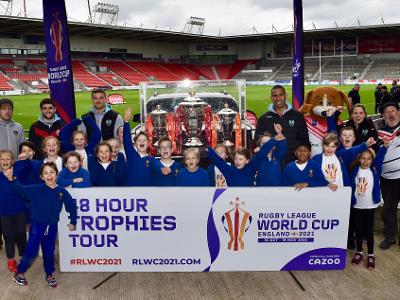 To be held in England between 15 October and 19 November, organisers are aiming to draw in record crowds to the tournament, with the men's, women's and wheelchair competitions staged in a single, celebratory event.

As part of activities taking place up and down the country to mark the milestone, a group of Year 4 pupils got the opportunity to take part in a number of rugby drills with Saints players Will Hopoate and Matty Lees - while local funnyman and avid Saints fan, Johnny Vegas, was also among those in attendance to celebrate the occasion.

To commemorate the 200 days to go countdown, the Rugby League World Cup has been undertaking a 48-hour trophies tour of the 18 host towns and cities in celebration of a 48-hour ticket upgrade offer, whereby fans can benefit from a ticket upgrade that is too good to miss. This means any fans that buy a Category C ticket for the fixture between Tonga vs Papua New Guinea at The Totally Wicked Stadium will have their tickets automatically upgraded to Category B, with prices starting from just £15.

During the tournament, St Helens and Liverpool will host the Tongan and Italian men's national teams who will prepare for matches at Ruskin Drive Sports Village; nearby Cowley International College and the new fitness suite at Newton-le-Willows Health and Fitness - while three mouth-watering men's group stage fixtures will be held at Saints' 18,000 capacity Totally Wicked Stadium, considered to be one of the best purpose-built rugby league grounds in the country.

Fixtures are as follows:

"Given the borough's proud history and heritage, St Helens is synonymous with the sport of rugby league, from Saints, right through to grassroots community clubs - so it would be hard to imagine a World Cup going ahead in this country without us.

"With three big clashes being held here involving some of the game's biggest stars - as well as hosting the Tongan and Italian men's national teams - St Helens is more than ready to play its part in what promises to be the biggest, best and most inclusive Rugby League World Cup ever."

Mike Rush, CEO of St Helens R.F.C. said: "We were delighted to welcome the Rugby League World Cup trophies to the town on Wednesday as part of the 200 days to go milestone.  We have already seen huge support for Tonga who will play two matches here at the Totally Wicked Stadium, and we look forward to welcoming them and the other teams who will be involved in matches here in the town."

Jon Dutton, Chief Executive of RLWC2021, said: "After an incredibly challenging couple of years for everyone, it is hugely exciting to be able to take our three unique trophies to each host partner as they put on their own celebration and make a 'Real Impact' in their local communities.

"We'd like to thank our partners in St. Helens and Liverpool for their brilliant event to mark the milestone. The road to RLWC2021 starts now and with this limited ticket offer and exciting new campaign being released, we hope to encourage fans up and down the country to obtain the best seats in the house at the best possible price."

Ticket prices for the tournament start as low as £2.21 for concessions, as the unique tournament will be one of the most accessible and affordable for fans with more than 80% of tickets priced below £50. Fans can purchase tickets via www.rlwc2021.com/tickets.