A ground-breaking national art education project to transform understanding of the transatlantic slave trade is on display at several sites around St Helens borough for residents to see. 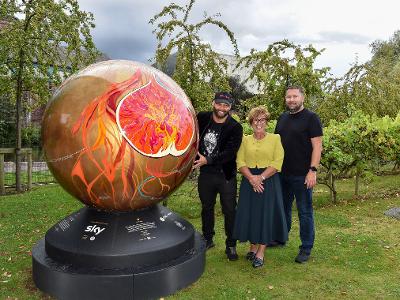 Through more than 100 globes that have been installed around seven cities across the country, The World Reimagined aims to create a baseline of knowledge about the transatlantic slave trade in enslaved Africans.

The project has been brought to the area by the Liverpool City Region Combined Authority, with a large fibreglass globe in the World of Glass Museum garden, titled 'Tributaries of Knowledge' by artist Bryony Benge-Abbott - as well as six other smaller globes in libraries across St Helens borough - forming part of a 50-strong trail across the City Region.

Commenting on a recent visit to the World of Glass, Councillor Anthony Burns, Cabinet Member for Wellbeing, Culture and Heritage, said: "We are proud to support such a powerful and inspiring project which looks to increase understanding about the transatlantic slave trade and its impact.

"The globes are a symbolic reminder that we should not forget our somewhat dark past in terms of the region's involvement with the slave trade, but to also look forward to a bright future. It's great that the community has really got behind this project, with schools playing a key role - and I'd implore everyone to come and pay these fantastic pieces of artwork a visit while they're around."

Miguel Doforo, whose great-grandfathers were brought over from Africa as slaves, was involved in creating a globe which is on show at Newton-le-Willows Library.

Miguel said: "When the Liverpool City Region reached out to us to see if we wanted to get involved, I jumped at the chance right away to raise the profile and awareness in St Helens of the topics the World Reimagined is trying to talk about, but most importantly - what do adults, children and young people currently know about the history of the slave trade.

"Sometimes, people don't know what question they can and can't ask when they meet a person of colour, but we're very much about social change and what we dance about has been transcribed onto a globe.

"Education is key - you need to communicate with people and ask the questions and talk about this. I feel that's the only way moving forward - and the globes, I feel, are doing this because they're non-threatening, a great piece of art that everyone can go and see but there's also a lesson behind them."

The World Reimagined globes will be on display until October in the following locations:

•         Garden of World of Glass Museum - created by Bryony Benge-Abbott

To find out more about The World Reimagined project, visit: www.theworldreimagined.org