A number of Remembrance Sunday services will take place across St Helens Borough on 13 November to honour those that gave the ultimate sacrifice during conflicts of the 20th and 21st centuries. 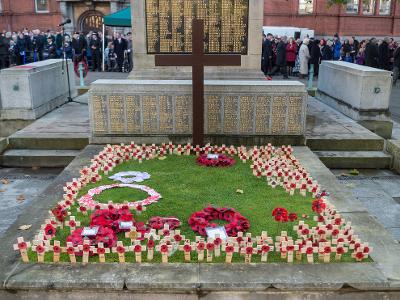 As in previous years, residents wishing to pay their respects are invited to congregate at Victoria Square on Sunday 13 November at 10:30am where a parade - led by Armed Forces veterans and young representatives from the cadets, scouts and guides - will make its way from Birchley Street to the cenotaph near St Helens Town Hall.

The ceremony - which will be signed by an interpreter - will open with a welcome and prayers from Revd Rachel Shuttleworth before the square observes a two-minute silence at 11:00am.

After the two-minute silence, the ceremony will continue with words of commemoration and readings from veterans as well as performances from Haydock Male Voice Choir, Valley Brass Band and Anna, the Golden Age Songbird - before the laying of wreathes and planting of crosses.

Afterwards, a St Helens Archive exhibition of compelling historic materials to show the impact war had on the lives of local people and the community will be on display in St Helens Town Hall where refreshments will be available.

Over in Newton-le-Willows, the focal point will be the war memorial at Earlestown Town Hall, with the event due to get underway at 10:45am, with St Helens North MP Conor McGinn; Deputy Council Leader Seve Gomez-Aspron MBE; Deputy Mayor and Armed Forces Champion, Councillor Lynn Clarke; and the Deputy Lord Lieutenant David Steer KC, among those expected to attend.

After the parade, a church service - led by Revd Tim Griffiths - will be held at St John's Church, followed by refreshments at Viaduct Sports Club on Earle Street.

Elsewhere in the borough, there will be public services at the war memorial at the junction of Burrows Lane and St Helens Road, Eccleston Park, 11:00am; St Anns Church, Rainhill at 10:30am, followed by refreshments at the ex-services club; Rainford All Saints Parish Church - while the Valley Brass Band and Royal British Legion will be in attendance for two services in Haydock. First at St Marks Church, West End Road 1:30pm for a service in the church followed by wreath laying at the war memorial outside. There will be a later service at Haydock Memorial Garden, Vista Road with attendees asked to meet at 2:30pm for a 3:00pm start.

Small services will also be held on Armistice Day (11 November) from 10:45am, including St Helens, Earlestown Rainford, Crank and Billinge, where local primary schools will head to the Remembrance Garden at the top of Main Street for a service.

St Helens Borough Council's Armed Forces Champion and Deputy Mayor, Councillor Lynn Clarke, said: "Remembrance Sunday is a fitting opportunity for us to honour those who gave the ultimate sacrifice for their country by defending our freedoms and protecting our way of life.

"We ask that you join us in attending a commemoration service to help ensure their memory lives on forever."

Councillor Anthony Burns, Cabinet Member for Wellbeing, Culture and Heritage, added: "Remembrance Sunday is the most important occasion on our events calendar, with hundreds of people - young and old - turning out each year to pay their respects and this year will be no different.

"Our borough has more than played its part in the many wars and conflicts throughout history. While many have lived to tell their stories, we've sadly lost a lot along the way too who gave their tomorrow for our today."

To find what support is available in St Helens Borough for members of the Armed Forces, past and present, visit: www.sthelens.gov.uk/armedforces