The Rugby League World Cup 2021 may be over but its impact on St Helens Borough will certainly last a lifetime. 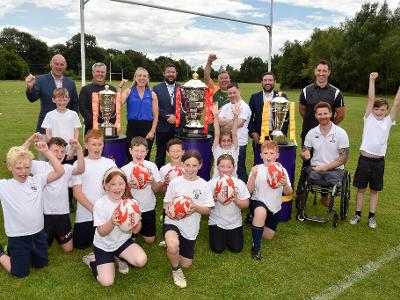 Having kicked off in Newcastle on 15 October, the tournament concluded on Saturday, with an Australia double in the men's and women's finals to retain their titles - while England lifted the wheelchair trophy the previous night to round off the most diverse and inclusive Rugby League World Cup ever.

During the five-week event, St Helens held three men's group stage matches at Saints' Totally Wicked Stadium, including Tonga vs Papua New Guinea, among the closest contested games of the tournament, and had the honour of hosting Tonga and Italy who trained in the borough at Cowley International College as well as council-owned Ruskin Drive Sports Village and Newton-le-Willows Health & Fitness.

Even before a ball was kicked or a try scored, the impact and legacy of the Rugby League World Cup had already left its mark, with grassroots community clubs and schools benefiting from grant funding, while community engagement sessions saw children and young people rubbing shoulders with some of rugby league's biggest stars during school visits and coaching sessions, as well as getting a taste of different foods from around the world through a special menu provided by the council's school meals service.

Recognising the many benefits rugby league brings at grassroots level, including improving health and wellbeing and producing local talent, the council launched a legacy fund, similar to that of the Rugby League World Cup's CreatedBy initiative, which saw almost £400,000 awarded to community clubs and schools to carry a number of improvement projects, bringing the grand total of investment in local clubs to £1.6m.

On top of that, grant awards of up to £500 were made available to local rugby league clubs by St Helens Borough Council to purchase kits and playing equipment as part of kickstart initiative to encourage participation at junior level.

Hailing the Rugby League World Cup a success in St Helens, Councillor Anthony Burns, St Helens Borough Council's Cabinet Member for Wellbeing, Culture and Heritage, said: "For us, being part of the Rugby League World Cup was always going to be a lot more than just hosting three fantastic matches at Saints - we really wanted was a leave a legacy and a lasting impression which has certainly come to fruition.

"From the get-go, a lot of work has gone into really maximising the opportunities of being involved in one of the biggest sporting events in the world and welcoming people from all over the world to our borough. From dressing up St Helens town centre and other areas of the borough;  the immense effort that's gone into education - including schools adopting a participating nation; learning about different cultures; our school meals service introducing a themed menu - to facilitating 27 player visits to primary schools in one afternoon.

"Then there's the significant amount of funding that has gone into growing the grassroots game. After going down to visit a number of clubs who have benefited from our grants, I've been blown away by the transformations and what it means to those associated with the clubs, many of whom give up many hours of their time a week to volunteer.

"By investing this money, we pledged to support local rugby league teams to help improve the facilities and hopefully influence the next generation of rugby league stars in a borough where rugby is more than just a game - it's a way of life."

Commenting at the time on how much of a difference the kickstart grant had made to their club, Paul Levick, former Chair of Blackbrook Royals, said:

"Not only has this initiative given children in the area the opportunity to engage in physical exercise, it also has the potential to produce future players and help to sustain the sport in St Helens for years to come. This funding, like any financial support, is very much appreciated by all at Blackbrook Royals JRLFC."

During the summer, Portico opened its state-of-the-art clubhouse, made possible through various funding streams, including the council's legacy grant, with England women's star and former Portico player, Zoe Harris, invited down for the official unveiling, before the club welcomed Tonga players and head coach, Kristian Woolf, for a Tongan Community Day event.

Commenting on how much a difference the new clubhouse has made to their club, Chairman, Mark Hoban, said: "St Helens Borough Council, along with other funding partners, have been instrumental in this once-in-a-lifetime project ever since its inception more than three-years ago which is fitting for the people of Portico Vine, for the children and young people of Portico Vine, and for the next generation.

"What was important to us is that it captured the history of the club, the present and build for the future. The growth and the opportunity is like a blank canvas - It's something that's never been here before and we think this is going to be a focal point for the community now, a place people know that is well run which will hopefully attract new members and families who we're ready to welcome with open arms."