St Helens Borough has taken up the mantle of Liverpool City Region Borough of Culture for 2023. 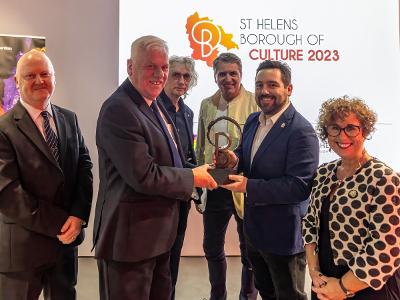 Councillor David Baines, Leader for St Helens Borough Council, officially received the sculpture designed by Emma Rogers, at Knowsley Council's final events of their year of culture at a performance of A Christmas Carol at the Shakespeare Playhouse North in Prescot.

Steve Rotheram the Mayor of the Liverpool City Region introduced the Borough of Culture initiative in 2018, as part of his '1% for Culture' initiative, which commits to invest one per cent of the Combined Authority's annual budget directly in culture and creativity. The title rotates around the areas that make up the Liverpool City Region, showcasing the unique cultural attractions and identities in each part of our region, and how they merge together.

Mayor Rotheram said: "It's hard to believe that it's been almost five years since St Helens was crowned our region's first Borough of Culture. It was an incredible debut year that saw the town showcase its unique blend of creativity and culture, which contributes so much towards making our region one of the most vibrant places to live and work.

"Our area is the UK's cultural capital for a reason - because nowhere has the same flair for bringing together creativity and celebrations quite like us! I'm really looking forward to seeing how the St Helens community pulls together once again to share its story and shine a spotlight on the very best of what the town has to offer."

Councillor David Baines said: "It is with great pleasure and pride that we accept the formal handover of the Liverpool City Region Borough of Culture title from Knowsley to St Helens Borough. I'd like to congratulate Knowsley on their successes their year, not least the opening of the spectacular Shakespeare North Playhouse, which helps to remind us of the importance of storytelling in our culture - it defines who we are, how others see us, and how we see ourselves.

"We want to use this year to tell stories of our sporting triumphs, our homegrown stars of national stage and TV, our workers whose ingenuity and backbreaking work drove the Industrial revolution and who still innovate and excel today, and stories of the incredible strength and solidarity we saw in our communities through the pandemic and other challenges.

In the coming year we will look to celebrate all this and more - celebrating our past, and building our future."

"The year will see activities run in communities across the borough, making sure the key to our success is making culture, in all its forms, is accessible for all."

Dates and events for next year will be announced in the coming weeks and to make sure no one misses out make sure to follow St Helens Borough Council's social media channels.