While the chances of becoming a drink spiking victim are very low in St Helens Borough, venues, residents and visitors are being equipped with the knowledge on what to do should the worst happen as part of a new awareness campaign. 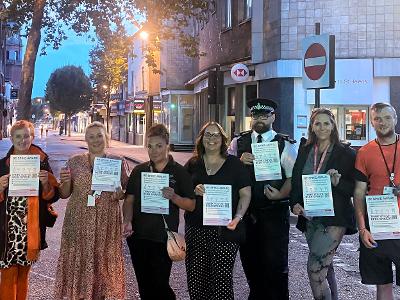 The 'Be Spike Aware' campaign launched on Friday night (2 September) when members of the multi-agency Community Safety Partnership went out to bars and clubs in St Helens Town Centre, distributing awareness posters and training for venues, as well as Spikeyz bottle top stoppers for customers.

Drink spiking is the act of adding another substance to a drink to make someone change the way they behave and, potentially, be more vulnerable to a variety of criminal offences. It includes:

· Adding alcohol to an alcohol-free drink

· Adding additional volumes of alcohol to an alcoholic drink

· Slipping 'date rape', illegal or prescription drugs into any drink

One in nine women and one in 17 men in the UK said they have been the victim of drink spiking. You should never leave your drink unattended, never accept a drink from strangers and always watch your drinks being poured.

Spotting that someone has been spiked can be difficult, but symptoms can include lowered inhibitions; loss of balance; feeling sleepy; visual problems; confusion; nausea or vomiting; and unconsciousness.

The partnership is working with local licensed premises to promote the responsibilities they have to help to prevent crime and disorder, including spiking, and support spiking victims if they are feeling unwell, have been assaulted or if an ambulance is required.

"Although the risk of being spiked is low, we want to keep it that way and it is our collective responsibility to do so. Both we as night-time economy visitors and staff at the venues we visit should know the signs of spiking, how we can prevent it and how to get support if the worst does happen.

"People often don't report spiking incidents because they don't think they have any evidence, don't remember details, or they feel embarrassed. It's not your fault, and it's important to report it straight away, as drugs are only in your system for a limited time. We do not want victims to suffer in silence, and we also want to impress on anyone considering spiking the seriousness of the consequences."

For more information about spiking and the Be Spike Aware campaign, visit http://safer.sthelens.gov.uk/pages/be-spike-aware/